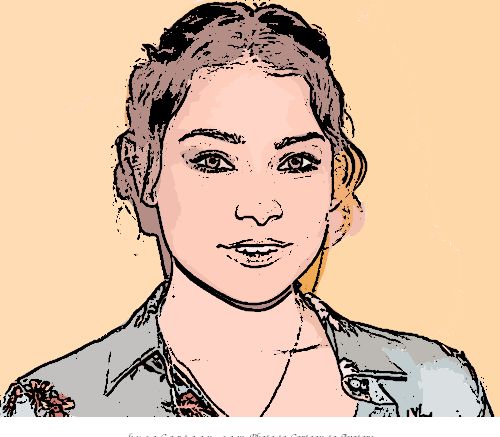 Jessica Parker Kennedy, the Canadian actress started her career back in 2005 with the television film ‘Santa Baby.’ She was born on 3rd October 1984, in Calgary, Canada.The 37 years old Canadian national is 1.54 meters tall. Jessica has light brown eyes with blonde highlights on her hair.

Jessica after graduating from High school secured admission in “Mount Royal College” in Calgary, and opted for the theatre arts degree.Her father belonged from Brooklyn while her mother was German. She was a daughter of a black and a white parent belonging from different areas of the world with distinct ethnicities. She made a tweet regarding her Russian ancestors. Jessica doesn’t mention anything related to her father in her interviews. Jessica’s mother Toni Kennedy brought her up alone. Toni Kennedy was a school teacher. Jessica was into gymnastics during her school days but her mother was reluctant to let her practice it and opt it as a career due to the great risk of having worse injuries. Kennedy’s passion for singing also developed during her school life but she decided to practice it as a hobby rather than a profession. Toni Kennedy supported her daughter wholeheartedly in pursuing her dream of becoming an actor.

Jessica is currently an ambassador of Project zero. Project zero is a charity organisation, showcasing the significance of the ocean and creatures living below. Jessica’s interest for wildlife and nature can be witnessed by watching her social media feed. Her concern reflects her passion and sincerity for the cause. Jessica is believed to have a net worth of 5 Million Dollars. Her income sources include films and television primarily, whereas brands and ads contribute secondarily. Jessica has more than 584k followers on Instagram. She is known to have been making donations much often although the figures are kept confidential. Her adventurous nature along with her love for animals makes her personality quite admirable for her fans.

Jessica Parker is married to an American actor  Ronen Rubienstein. They are settled in Los Angeles. Ronen Rubienstein played a gay character that earned him great appreciation and applause at the time but also raised questions regarding his bisexuality. Jessica supported her husband even after he was found to be bisexual by her. Their relationship started back in 2018. Jessica and Ronen have quite a few common passions such as climate campaigner and ambassadors for Project zero, an Ocean conservative campaign.

The couple posts pictures of them together, much often. They have 2 dogs as well, named ‘Spot’ and ‘Freshy’. These 4 family members often hangout with each other and become the  talk of the media.

At the start of their relationship Ronen Rubienstein lived in an Arts district in Los Angeles. They used to spend alot time with each other, so in order to save the time of travel the romantic couple bought a house for themselves toward the eastern side of LA. The family of 4 lived together in the newly bought house. The house entrance had a polished wood floor, the windows were high arched to capture the captivating view of the morning sunshine.

It is also reported that Jessica had a relationship with Luke Arnold in 2014. The two actors on the set of ‘Black Sails’ found love in each other. The acting performances on the set sow seeds of love in the hearts of the two young actors. Their personal assistants denied the rumours of any love story claiming they were only friends. The couple began to hangout with each other around the shooting area more often than before. Vancouver could witness the romantic acts of the two love birds. Luke Arnold even offered Jessica to spend Christmas at his hometown Adelaide, Australia and she was excited about it. Luke accompanied Jessica for trekking and camping on the trails of Canada. To the world they seem a great couple but neither of them accepted or denied the rumours of their relationship.

Jessica has a great deal of love for animals. She has 2 dogs as her family members and is always witnessed posting wildlife images and defending their rights. She is also a member of the “ Stand up for Pits “ foundation, which provides shelter to the pit bulls. Jessica in her  social media feed defended the pit bulls against the accusations that they were dangerous. She claimed them to be really friendly, mentioning her “Freshy” in regard.

Jessica is also known to drive a social media campaign for the animals and humans suffering during the Amazon fire. Her love for nature and wildlife correlates with her adventurous passion.

Jessica Parker Kennedy made her debut in the movie ‘Santa Bay’ in 2006. The young Canadian actress won the hearts of many people and became a source of attraction for the TV directors. Next she did a comedy film ‘Another Cinderella story’ playing the role of second lead along with Selena Gomez. This act made Jessica more prominent in the eyes of people, making them believe her potential. She played the role of ‘Bette Sans Souci ‘ for three episodes in ‘Smallville’ in 2008. In this act she was a supernatural girl. In 2011 she was part of the famous supernatural series ‘The Secret circle’ and played the role of Melissa glaser. The series was a success initially but was later cancelled due to some technical issues. Jessica also played the role of Megan Rose in the famous TV Series ‘90210’.

The major breakthrough in Jessica’s career came along with her role in the infamous historical series ‘Black Sails’. One of the most expensive and biggest projects of all times brought Jessica Parker Kennedy into the spotlight. This historical series was shot in South Africa, where Jessica had to reside for 4 years during the shootings. Jessica is reported to have been fantasised by the adventurous land of Cape town, and being part of Micheal Bay’s movies was a life wish becoming full. According to Jessica, it was till now the most interesting and dearest work of her life.  The project seemed to be tough for her initially, bringing on new and hard challenges to her, but she didn’t lose faith in herself and kept trying. Jessica liked the series and her role, she is reported to have said that she used to think that palying the role of a pirate was a really coo. She later realised it wasn’t cool but instead horrifying world with no justice or rule and law. Many died of epidemic and pandemics as there was no cure or treatment available.

Jessica in her interviews said that her personality didn’t match her character ‘Max’ in real life. Max is a selfish person who is fond of herself only, as the situation requires the survival of the fittest so she needs to adopt   a self centred approach. Jessica was comfortable of the sex scenes short during the series. She loved the adventures of Cape town and went on to experience the famous Shark cage diving. It was during the shootings of this series Jessica caught public attention and rumours of her relationship with Luke Arnold came into light. Black sail was the biggest hit performance of her life.

In 2018 Jessica played the role of ‘Baby Sister’ in the horror movie ‘ Deep Murder.’ It was her first experience in the horror category and she claims to have enjoyed creating deep, distinct pitch. Jessica has worked in many other movies and TV series including ‘ In time, Bad meat, Gemini, The perfect guy and Business ethics. She had also worked in ‘Vampire diaries.’

Jessica became a sensation with her entry in the famous English series ‘Flash.’ Kennedy was introduced in season 4 of the Flash as the future daughter of Barry and Iris’. Kennedy played the role of Nora West Allen. She made her first appearance in the series after Berry and Iris’ church wedding. Nora was known as the ‘mystery girl’ in the series as she kept on making appearances throughout the series, dropping clues. Her role has brought many twists in the series, making it more suspenseful and interesting. Jessica’s character reappeared in season 5 and made the series more interesting.

Jessica Parker Kennedy keeps her passion for acting in close harmony with her adventurous nature. She tries to utilise every possible platform for promoting wildlife protection. Her Instagram feed is filled with wildlife protection campaigns and donations for NGOs’. Jessica with her tranquil nature is appreciated by her co-stars and directors. The girl from Calgary made it to the top notch of the Hollywood fraternity. Her dedication and unprecedented hard work made her fulfil her dreams. Jessica’s role in flash is currently in the spotlight. People are loving her character and acting. Jessica Parker has made her way into the industry and is leading on the road to success.